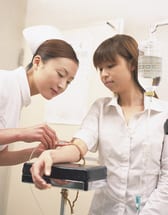 Wilson disease, also known as copper storage disease or hepatolenticular degeneration, is a rare genetic disorder in which excess copper accumulates in the body. While copper in small amounts is necessary for healthy functioning, the body normally excretes any excess. Under normal circumstances, the liver releases extra copper into bile in the digestive tract.

For those with Wilson disease, copper builds up in the liver and is released directly into the bloodstream. Excessive copper in the body acts as a poison, and the condition becomes life-threatening, making it important that Wilson disease is diagnosed and treated in its earliest stages.

Because it has a wide variety of symptoms, many of which are common to other diseases, Wilson disease can be difficult to diagnose. Its wide-ranging symptoms result from the fact that excess copper acts as a poison, affecting many systems of the body. Other symptoms of Wilson disease may include:

Wilson disease is hereditary, so screening is required for those who have a blood relative, particularly a parent, with the disease. Most people with Wilson disease do not have a family history of the disease, because the defective gene must be inherited from both parents. A person who has only one affected gene may have mild copper-metabolism abnormalities, but they are considered medically insignificant. Wilson disease is present at birth, but is usually not discovered until later. Although there are reported diagnoses of Wilson disease at almost all ages, the majority of cases are diagnosed in patients between 5 and 35 years of age.

Unique signs of Wilson disease are characteristic rust-colored rings, known as Kayser-Fleischer rings, around the iris of each eye. Although these rings are helpful in diagnosis, and are present in almost all patients with neurological symptoms, they are only present in half of patients with liver damage alone, so their absence is inconclusive in ruling out the disease.

Methods of diagnosing Wilson disease may include the following:

The treatment of Wilson disease focuses on reducing the amount of copper in the body. Medications used for this purpose are known as "chelating agents." To prevent copper from building up again, maintenance treatments at lower doses may be required. In addition to taking medication, patients with Wilson disease need to alter their diets in order to lead normal lives. Treatments for Wilson disease are ongoing.

When Wilson disease is first diagnosed, most patients will need to take chelating agents such as penicillamine or trientine. These medications may cause serious side effects, and have to be carefully monitored. The risk of neurological symptoms is less with trientine. Once the copper level is reduced to within normal limits, a patient is usually administered zinc acetate, which prevents the body from absorbing copper from food. The only common side effect of zinc acetate is an upset stomach.

Patients with Wilson disease have to permanently eliminate shellfish and liver, which are high in copper, from their diets. During early treatment, they will also have to refrain from eating chocolate, mushrooms and nuts. It is also necessary for patients with Wilson disease to check copper levels in the water they drink, and to avoid multivitamins containing copper.

In the most serious cases of Wilson disease, in which the liver has been irreparably damaged, a liver transplant may be required.