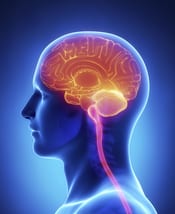 Stereotactic radiosurgery (SRS) is a kind of external-beam radiation therapy capable of precisely targeting small areas within the body. Although its name would suggest that SRS is an invasive procedure, there is actually no cutting involved. Initially developed for use on tumors and lesions in the brain, SRS is now sometimes used to shrink or slow the growth of tumors in other parts of the body, when it is referred to as stereotactic body radiotherapy (SBRT).

Stereotactic radiosurgery is ideal for treating tumors when it is essential that radiation be directed with enough precision to avoid certain nerves or structures. SRS is also used in the treatment of several other medical conditions.

SRS is ideal for treating abnormal growths that are hard to reach, located in or near vital organs, or likely to move within the body. Benign or malignant tumors commonly treated with SRS include:

Stereotactic Radiosurgery for Other Medical Conditions

In recent years, SRS has been found to be an effective treatment for a number of medical conditions besides growth of abnormal tissues. These include:

There are many advantages to SRS treatment. Since the procedure requires no incision, general anesthesia, with its associated risks, is unnecessary, there is no danger of excessive bleeding and almost no possibility of infection. SRS treatment, though it may take as many as five days, is typically administered in a single session, resulting in a cost-effective procedure and minimal disruption of activities for the patient. While SRS delivers high doses of radiation, it does so with minimal exposure or damage to adjacent healthy tissue. During SRS, the patient is carefully monitored to avoid overexposure to radiation.

Generally, patients undergoing SRS are asked not to eat anything after midnight on the day of the procedure. If the brain is being treated, hair creams or hairspray should not be used the day before. During treatment, the patient is positioned lying down on a table. The table then slides into a machine that delivers the radiation. Three types of machines may be used in SRS treatment: a Gamma Knife® unit, a linear accelerator and a cyclotron.

When the SRS procedure begins, three-dimensional imaging, such as a CT, MRI or PET/CT scan, is used to locate the abnormality and determine its shape and size. In some cases, a contrast agent will be administered to the patient to make the tumor more visible. A precise high dose of radiation is then aimed at the tumor area, making it essential that the patient remain extremely still. A head frame or individual body mold designed to limit a patient's movements may be required. Up to five separate sessions, each between 30 minutes and one hour in duration, may be necessary for complete treatment.

In spite of the careful precision with which stereotactic radiosurgery is administered, there may be damage to surrounding healthy tissue. In patients who are treated for brain tumors, swelling of the brain, or brain edema, may occur. Although this symptom may resolve on its own, in some cases medication may be required. Other serious complications may include seizural activity following treatment, a possible regrowth of the targeted tumor or a development of a secondary cancer. More common side effects of SRS treatment may include: